Sales up to 50% off. 2nd markdown : extra 10% off on textile items already on sale! Discover >
Our CellarWhisky Whisky by countryScotlandHighlandsAn Cnoc 12 Years Old 70cl 40° 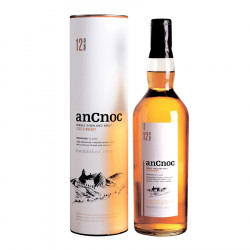 An Cnoc 12 years old is an iconic bottling of the distillery The Knockdhu. This aromatic Scottish whisky is light, complex, rich and elegant at the same time.

An Cnoc 12 years is an iconic bottling of the Scottish distillery Knockdhu. This version is both light and complex, rich and elegant.

This Single Malt has a sweet profile with malty aromas, pear and vanilla.

This Scottish whisky offers notes of lemon and honey on the nose. The finish is delicately herbaceous and extends into gently spicy citrus notes.

An Cnoc 12 years to the world famous is a whisky collectors.
Read more
Fold back text
Features

AnCnoc Whiskies are produced by the Knockdhu Distillery located in the village of Knock in Scotland and more specifically in the Speyside region. This name was given to avoid confusion with the Knockando Distillery.

The Knockdhu distillery opened its doors in 1894 under the leadership of John Morrison, it is ideally located, indeed the presence of water source as well as the abundance of peat and barley allows the production of Whiskey.

Tradition is part of the soul of the distillery, since its creation it has used copper stills unchanged in their shape, giving a light and fruity Whisky. The production method has remained almost unchanged for 100 years, and the current modifications are mainly related to the desire of the distillery to have the least possible impact on its environment.

Products from AnCnoc
Colour: amber with a slight yellow tint.

Nose: very aromatic with a hint of honey and lemon.