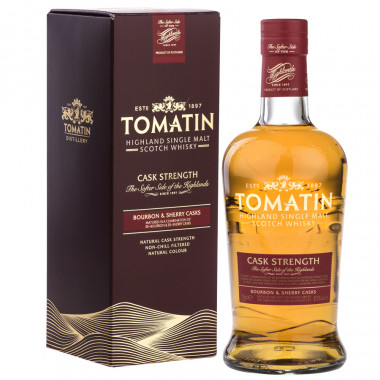 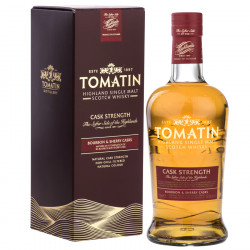 This Cask Strenght version is without any doubt one of the most intense expressions in the range. However, it is marked by sweetness and richness, two typical characteristics of the Tomatin distillery.

Aged in a classic combination of first-fill bourbon casks and Oloroso sherry casks, this Cask Strenght version of Tomatin has nice aromas of ginger biscuits, malt and almond paste, followed by a long finish, persistent and spicy.

This is undoubtedly one of the most intense expressions of the range. However, it is marked by sweetness and richness, two important characteristics of the Tomatin distillery.

The Tomatin range has a strong identity thanks to all the know-how developed over the centuries by the distillery. It was considered in the 1970's as the largest distillery in Scotland, with a capacity of 12 million liters. Today the facilities are voluntarily more modest to achieve the following aim: to create the first range of Scottish whiskies with a soft and refined range, characteristics not really common to the other great classics of the Highlands.

Nose: golden malt base with hints of cooked fruit, dark chocolate and cinnamon.

Finale: long with hints of sherry.