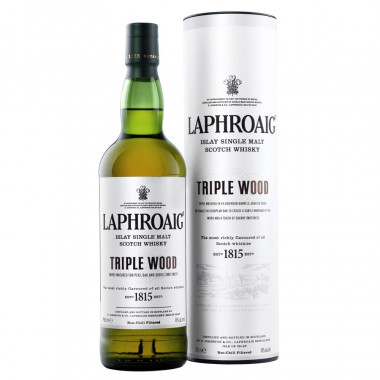 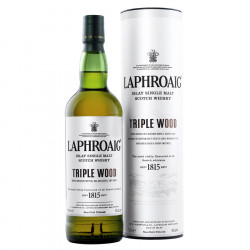 A triple maturation that brings the aromatic balance between peat, oak and Sherry to the utmost.

Laphroaig Triple Wood has been triple matured in three different casks. Firstly hosted by American oak casks that contained Bourbon Maker's Mark, the whisky has then aged in Quarter Casks, a type of small casks that the distillery used in the 19th century. The whisky undergoes a final maturation in carefully selected European oak casks, that previously contained Oloroso Sherry.

This particular ageing enables a perfect aromatic combination of the peat, oak and Sherry, while maintaining the iodized and peated style so typical of Laphroaig. This Single Malt has not been chill filtered to retain all its aromas.

A no age statement, Laphroaig Triple Wood is being bottled when the Master Distiller deems it has reached perfect maturity.

The 'Quarter Casks' were formerly used for storage and maturation of malt whisky but were soon considered as too pricey. Some historians would explain that this allowed the distillers to take the cattle roads in order to avoid custom agents. Nevertheless, these small casks increase by 30% the contact surface between the wood and the spirit, but also with the air.

Nose: pleasant notes of ripe apricots and raisins, evolving onto dried fruits. The peat prevails but with great softness. With dash of water the peat and smoke bounce back.

Palate: the peat power softens with a vanilla silkiness. A drop of water allows for the complex citrus aromas to rise. The body is full and mellow at the same time.